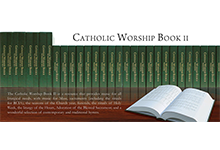 Paul's psalms, hymns and Mass setting compositions are widely used in parishes and schools throughout Australia and New Zealand as well as in "Mass For You At Home," broadcast weekly on Network Ten.

Paul also serves the Church in the following roles to help promote music in the liturgy - the beauty that invites prayer.

Paul Mason is a liturgist and composer of liturgical music. He has worked in the music industry and in IT since the 1970’s, and began composing liturgical music in the 1990’s. He first published Mass of Glory and Praise in 2004 through Willow Publishing, followed by Psalms For All Time in 2007. He established www.liturgicalsong.com in 2007 for online sales and distribution of publications. In 2008 he undertook the adaptation of Colin Smith's Mass Shalom to the new texts of the Roman Missal 3rd Edition. He first published Mass of the Saints in 2010.

Paul played a significant role in the establishment of the Australian Pastoral Musicians Network (APMN) and worked full time as the Director of Liturgy and Ministry for the Diocese of Wollongong during years 2011-2020. Paul retired from this position in February 2020 to concentrate on composing and publishing activities at Liturgical Song.